What hurts more airsoft or paintball? 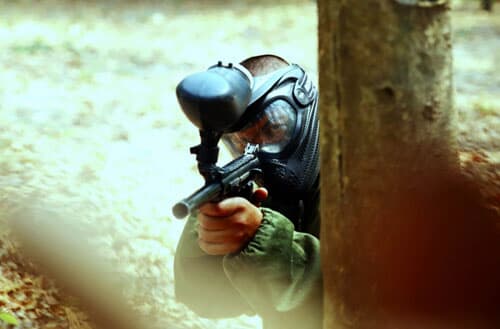 There is a huge rivalry between the proponents of airsoft and the proponents of paintball. One of the things, especially new players would like to know is how much pain you have to suffer if you get hit during the game of airsoft or paintball. We all would like to avoid any kind of physical pain but without it, you can't play either game. Even though these balls are pretty small, they can hit hard. So be careful when it comes to eyes, fingers, groin, neck, lips, ears, and back or the top of the head. These are sensitive body parts you must protect well enough.

The main difference between airsoft and paintball

In both activities guns shoot around approximately 300-400 fps but the main difference is in the bullet weight. Airsoft BB weighs 20 grams, on the other hand, typically paintball only 3 grams and that is a big difference. Paintballs have much more energy than airsoft BB, even up to ten times more. Also, paintball will leave bigger bruises than airsoft BB.

Earlier we mentioned the most sensitive body parts. To avoid any eye damage it's necessary to use goggles or a mask. For paintballers, the JT Spectra is recommended while airsofters should wear Revision goggles.

What clothes to wear?

One of the first things to protect yourself is to find suitable clothes. If you are new in this kind of a game you should consider loose clothing such as sweatpants and sweatshirts. This will offer you a thin layer of protection and that's something we all have in our wardrobes.  If you want to repel shots, then you should think about wearing something like a vest. Most of the game you will feel almost nothing and shots will just repel off of you.

Does distance matter and what about wind?

Velocity of BB and paintball depends on the distance of course. BB starts to lose speed after reaching some point. For instance, if someone tries to shoot you from 170 feet then you probably won't even feel it. So always look how far is your opponent and you will be less hurt. Also, try to double-tap your opponents if they are far from you. It's very likely that they will feel the second shot.

What about the wind? Wind can affect your shooting if you are playing outside. The wind directly affects airsoft players more because they usually shot from larger distances and if you are shooting versus the wind, BB's will struggle to hit the target. On the other side, if you are shooting along the wind, it will help you, so sometimes it will go in your favor, sometimes not. Using BB's which are 25g or bigger if it's windy outside will work well for you and also take care of wind direction and adapt to it.

The type of the field for playing

The type of the field is important because of the distance. If you are playing in indoor fields, engagement with opposition will be around 25-50 feet. on the other hand, playing in an outdoor field, the average engagement distance is between 100 and 150 feet. That is a huge difference and we suggest you outdoor field, especially if you are new to this.

In the first part of the article, we compared the weight and strength of the bullets. Consider that, paintball hurts more than airsoft. Although the concept of the game is pretty similar, you can get more hurt by playing paintball. Besides that, take care of your and other people's safety. Never load a weapon of the field and have your finger on the trigger, unless you are ready to shoot. Good luck!