What do backyard lizards eat? 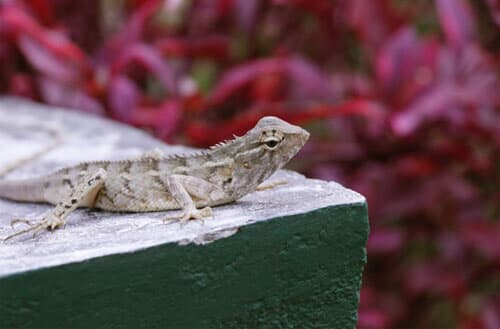 Lizards are one of the biggest groups of reptiles with over 3800 species. They come in many sizes, from a few inches to nearly ten feet and hundred of pounds. However, all lizards have some things in common like they're all cold-blooded with acute vision.

Some lizards are very friendly, kind, and kept as pets. If you ever wonder what they eat, it's easier to look at each potential lizard closely better than generalizing lizard eating habits. Wild lizards are not the same as pet lizards or baby lizards.

Lizards you may find in the United States

In the United States today there are 118 species formed in 8 families. Some of them like geckos, chameleons, and iguanas you already know but there are also other interesting like ground lizards, legless lizards, or race runners.

Most of them live in tropical regions because as we said all of them are cold-blooded. That means that the animal's body temperature is a reflection of a place where they are. Some other traits which make lizards special are dry skin, inability to chew food, no sweat glands, and the ability to molt their skin.

What do wild lizards eat?

Because of so many species, it's very hard to define a standard lizard diet.

Smaller lizards like chameleons or geckos eat mostly insects such as flies or crickets. They also eat other small creatures like spiders, snails and caterpillars. Basically, the lizard will eat anything smaller than him.
The bigger lizard is, the bigger is prey.

Komodo dragon, probably the biggest lizard has special bacteria in his saliva to paralyzes and kill his prey. So his preys often are pigs, deers, or even humans.

Some lizards are exclusively herbivorous like iguanas. They spend most of their time on trees and eat the leaves and fruits. Since they live in every continent except Antarctica, their diet is very specialized.

What about pet lizards?

Some species are very difficult to care for, while others can be versatile and independent. Most lizards can be kept alive on an easy diet of crickets with some supplements. So it's important to know what species your lizard is to establish his diet. For instance, breaded dragons are omnivorous so basically, they eat everything we mentioned. So his diet surely will include plenty of greens, crickets, or even mouses.

Geckos like to hunt insects and sweet fruits as well. Vegetables, fruits, and greens will be needed if you have an iguana and that makes them very hard to keep. Lizards mostly love to chase their prey and often will just reject 'dead' food.

What do baby lizards eat?

If you found a baby lizard and would like to keep him as a pet, he will need special care to be kept alive. The most important thing is to ensure enough light and heat.

You should visit pet stores and get a UV lamp, even a cheap one is better than nothing. A baby lizard can eat almost everything as an adult one so it's one worry less for you. Put a baby lizard in a container with the light on one end of it. In the first few days, you can offer him some crickets but probably he will refuse it because all babies want is to get warm.

Use that time to research the specie and needs of your new friend. Also, you maybe will have to take him to the vet to be treated for possible parasites.

These reptiles are often welcomed visitors in our yard because of their habits and diet that includes eating spiders, insects and other pests we don't like. Also, they can be very funny and sweet pets. They are not too picky about food and the best answer on what they eat is anything smaller than them.