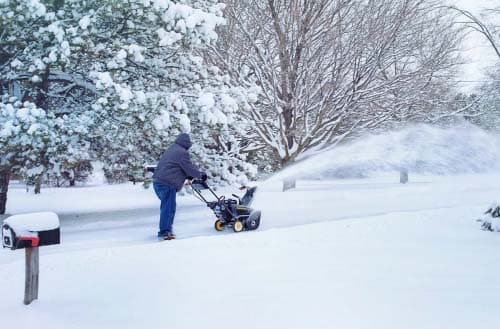 Depending on where you live, winter may be kind or unkind to your back. While a blanket made out of snow may be beautiful to look at, once you need to walk or drive over it, you will see where the frustration arises. Depending on the size of your driveway, you may spend quite a long time shoveling it away. Now, imagine that you have to walk into your backyard as well – even more, shoveling awaits!

But okay – let’s say you shoveled for 2 hours and managed to make decent pathways for you and your family to walk around in. You go inside the house for a nice cup of hot cocoa – you have definitely deserved it – when disaster strikes: the snowstorm picks up and undoes your hard work in a matter of minutes.

It is certainly a frustrating but natural occurrence. So, what can you do to help yourself and avoid snow? Well – besides building a weather control device – not much.

However, there seem to be some technological advancements that can make your life easier – and in this article we will outline, describe, and compare both of them. They are called snow blowers and snow throwers. So, to learn which one is better for your particular needs, stick around!

A layman might see one of these two devices and say they are the same thing. And, in principle, they would be both right and wrong at the same time. Their core principle is getting rid of snow, which both accomplish. However, when we get to brass tacks, they are quite a bit different and serve two different niches.

A snow thrower is a device that, in simple terms, picks up and throws away snow in one motion.

A snow blower, however, uses a two-part solution where the snow is firstly sucked up by a part called an “auger” and then blown away by a part called the “impeller”. This allows for much stronger action, so it is not really surprising that snow blowers tend to be a bit more on the expensive side.

Therefore, at first glance, you may suspect that snow throwers are for consumer purposes while snow blowers are more for professional usage, and you would not be far from the truth. But, let us describe each one separately and then you can decide which one would be right for you.

A snow thrower, as described above, is a machine that uses a single-stage mechanism to pick up and throw away snow. They are small-ish and portable, so one could theoretically use it on several locations easily. This means a snow thrower is excellent for smaller properties and creating specific pathways through the snow. Therefore, if you do not require the whole property to be cleared from snow and it is highly probable you do not, a snow thrower may not be a bad idea.

Of course, since it is smaller, it will also probably require you to make multiple passes, especially on your driveway. The lack of a two-stage mechanism may also mean that sometimes you will have to make a do-over, especially if the snow is on the wetter side.

Snow throwers, therefore, work best when there’s light snow – more than 10 inches of snow is asking for trouble. You will have trouble pushing it, and most snow thrower chutes are lower than on snow blowers so there’s a good chance of stoppage from above should you try to wade through deeper accumulations.

On the other hand, this perceived lack of power when compared to a snow blower also means you will be saving up on fuel – and most snow throwers can be powered via battery or a simple electrical cord. This may or may not be a good thing for different users since everyone will have their own needs. When clearing your own driveway, you may be glad to be able to use an extension cord and not bother with liquid fuels whereas using a snow thrower that is not gas-powered may be a pain when trying to clear your garden. Be mindful of where you will be using your device before buying to make sure you’re getting the best out of your time and money.

Lastly, but maybe more importantly – the price. Snow throwers are absolutely your cheapest option if you do not want to go for the tried and tested shovel. While their features may be limited and the power lacking, they more than make it up in price. You can find snow throwers as cheap as 100$ whereas the more advanced models can cost up to 900$, but these will offer more quality features such as automatically turning off when you let go of the trigger (so-called “dead man’s switch”), headlights, etc.

To sum up – snow throwers are a good budget option as basic models do not cost a lot and in moderate climates which do not see huge swaths of snow can dramatically reduce the time needed to clean property when compared to a shovel. Your back will also be very grateful to you.

If thinking about a shovel as a bike and a snow thrower as a nice, small family car, then a snow blower would be an SUV. Huge with loads of power behind them, snow blowers do not mess around. They are bigger and heavier than their snow thrower counterparts and cut through snow like a hot knife through butter.

As mentioned before, snow blowers use a two-part mechanism with the auger picking up the snow and letting the impeller blow it out – this effectively means that the blower will blow the snow significantly farther than a snow thrower ever could. Therefore, snow blowers are a great choice if your climate is known to bring down snowstorms and blizzards which regularly bury you in snow.

A snow blower covers a relatively wide area, which means when compared to a snow thrower you will need a smaller number of passes to clear the same amount of snow. Its power as well means that it is less likely that snow will stick even if wet, so one pass should be plenty to make nice clearings. Snow blowers are also self-propelled – which means that they push forward on their own and the person behind the proverbial wheel is there only to provide direction. In practice, this makes it a lot easier to push through even through deep snow.

Speaking of deep snow, the clearance is also higher than on a thrower, as the top of the chute is higher. You should definitely check with the maker’s specifications, but a lot of blowers easily mow through snow deeper than 10 inches.

As far as fuel goes, this kind of power requires different kid of fuel so expect gas or diesel. In practice, this also means you will have to check the oil and generally be prepared for higher maintenance needs than you would if you opted for a snow thrower. Gas-powered devices do have the advantage of being able to run until they run out, without you having to think about the cords or batteries.

As for the price, it is hard to argue that you will not get value in exchange for a higher price point. However, the same is true for snow throwers, so you may want to think about your needs before buying. You can find quality snow blowers for less than 1000$ with professional tools reaching exorbitant prices up to 2500$ - but chances are you will not need such a high level of tools and should simply leave them to professionals. Your driveway will probably be happy with the more basic ones.

When push comes to shove (and that is not a pun!), there are quite a lot of differences between a snow thrower and a snow blower – more than you might suspect at first glance.

Snow throwers’ systems are much more basic – usually one stage with the same system picking up and throwing the snow at the same time – which means throwers are best utilized on smaller surfaces cleaning snow that is not super deep. They mostly use electricity (via cord or battery) for fuel and are budget friendly – they run for as little as low hundreds which is a bargain when you think how much your back will be grateful to you.

Snow blowers, on the other hand, are beasts that chew through snow easily. Be it wet or icy snow, they will make short work of it regardless. They are also wider and easily maneuverable since they are mostly self-propelled but sacrifice portability – you will probably have to use a car or even a truck if you want to clean two distant properties. They are also on the pricier side due to all the power and advanced features it brings to the table.

In conclusion – while both tools are very useful to have when snow hits, you should do your research about the features they bring and compare them to your specific needs. There’s no need to overspend if you’re going to clean small parts of your property – but be mindful that it is very much worth it to spend a little bit more to make your life a lot easier if your property is big and suffers heavy snowfall.