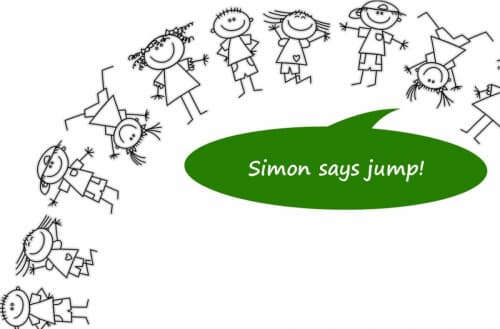 Simon says or known as Simple Simon says is a very popular game for three or more players. It's a funny and challenging game that may look simple and easy at first, but it's very hard to master and be good at it. In this article, we will introduce you to this game with rules and some ideas on how to play because sometimes due to excitement it's not easy to come up with challenges. Also, there will be some tips on how to make your game even funnier and harder.

How to play Simons says?

Let's start with rules. Rules, in fact, are pretty simple but the game won't be, although it may look simple. The great thing about this game is the number of players, there must be only one Simon, but the number of other participants is unlimited. So, one person is picked as Simon. His role is to give commands to other players but there is one big catch. Players must obey only commands that start with ''Simon says''. If Simon gives the order without these two words at the beginning, players who did that are automatically out of the game. Here is one simple example of how to play:

Now, all players who stop are out of the game because command didn't start with ''Simon says''.

Players can stop now, and get ready for the next instruction. The winner is the last man standing.

- Simon says tickle the person to your right

- Simon says stick out your tongue

- Simon says run on the spot

- Simon says stand on your toes

- Simon says pull on your ears

- Simon says be your favorite superhero

Tips on how to be the best Simon

As we already said, the game is very interesting, but what about Simon? Simon is a character who dictates the tempo od the game and his role is very important. If you are Simon, try not to give too difficult commands, especially if there are kids playing. Also, making the game too easy, you will spoil it and make it boring for every player. To be a great Simon you need to follow a few simple rules.

One of the crucial things in the whole story is speed. Confuse the players giving only one command in one minute, and then a few commands in a much shorter period. With this variation in speed, the game will be funnier and players must be constantly concentrated. For example, you can also give three commands at the same time, but only two of them will have ''Simon says'' part. So if players follow all three commands, they're out. Another great tip is to use more complicated words, not always, but if you play with kids, it's a great way for them to learn something new.

Simon says for every age?

Probably the biggest impact on the game will have the age of players. It's not the same if you are Simon giving commands to kids or older persons. A 13-years-old boy won't enjoy command ''touch your nose'' like a 4-years child would.

For kids under 8 years old commands should be very simple and easy. Try to slow down and give them some time to react, also keep in mind that kids won't understand every single word.

Kids from 8 to 15 years are probably the best players because they're old enough to understand everything but still enjoy every single moment of it. Commands should be challenging but nothing to difficult.

For older players and by that we mean 15 years and above, as Simon, you can use different speeds and more complex words and expressions. Older players are very competitive and keep that in mind while you give them commands.

With a little imagination, this can be a very interesting and instructive game for every age, especially toddlers and kids. We hope that this article gives you new ideas and commands you can try at your next game. Simon says is a type of game that will never go out of style. Enjoy!