Is it safe to drink from a garden hose? 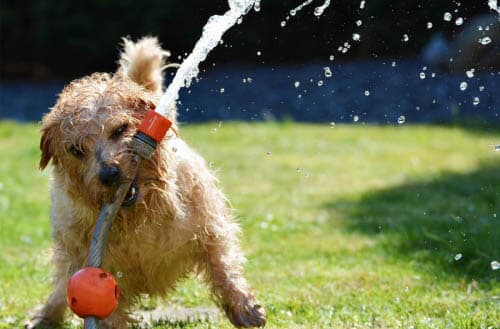 We can all agree that we find ourselves in a situation where during the hot summer days we wanted to drink from a garden hose and pretty much for the same, simple reason because it was the closest source of water at our hands. But did you ever wonder is it safe to drink from a garden hose? Every day we use that water for our garden and plants and fill up pets bowls. In this article, we will talk about drinking from a garden hose. At first sight, it's the same water we use in our houses from the tap in your bathroom or kitchen but it's important to know if they have the same source or maybe there is a separate supply. Let's find out!

The first thing we need to define is a water source. In most cases, you will find the same water in your garden hose and in the tap inside your kitchen or bathroom. Water pipes are all underground in your street arranged by properties. That water is safe and treated, in some states, there is fluoride in addition to water for your teeth's health. But still, there are a big differences and the main reason why should you avoid drinking from a garden hose. Pipes from your bathroom and kitchen are specially designed to prevent the penetration of water pollution because the primary role is the drinking source. On the other hand, in a garden hose that's not the case, because it's assumed that water from the hose won't be used for similar purposes.

There was research on 200 garden hoses and this proved the persistence of certain toxins that can be found in a hose. For example, PVC hoses have a higher level of bromine, phthalates, lead, and, antimony while in other kinds of hoses that weren't the case. Another chemical that can be found in your garden hose is BPA. That's why some products have a special label that says “BPA-free” because the dust rose about all the harm it does to humans. If you during the summer left your hose outside in the sun with some water in it, it could easily become contaminated with BPA. Despite this, you can find on the market a garden hose with the label “drinking water safe” and indeed, these hoses had none of this harmfulness.

Chemicals from the metal

Today, most outside taps and fixtures are made of metal, probably brass. Also, lead can be found in brass, and consumption of it can lead to poisoning. So, if the water stays for a while in your pipe, there's a higher chance of lead being found inside. Even if you open your tap and let the water run for some time, no one can guarantee that it will be safe for you. It's important to note that these pipes aren't coated which means they can rust at any time and add further contamination.

We already mentioned chemicals that can be found in water from a garden hose, but this water isn't checked for quality. The water you use from the tap in the bathroom or kitchen is going through authorized pipes but that's not the case with the outside tap and it's probably full of bacteria. According to the Safe Drinking Water Act, at some defined intervals water must be tested. Although the water is coming from the same source, they're checking only water that comes through household pipes, so the outside tap is not controlled. Today, most people neglect their outside taps and this favors the development of bacteria on outside fittings.

To sum up, drinking from your garden hose is probably not the best idea. You can't be sure what's inside the hose and the water inside also can pick up certain toxins and chemicals that can hurt you. Water will probably look crystal clear and tempting for you during summer days, but for you and your health, it's a much wiser choice to go inside the house and get some water. If you still want to drink water from your hose, then go for a hose with the label “drinking water safe”. It will cost you a little bit more.