How to play tetherball? 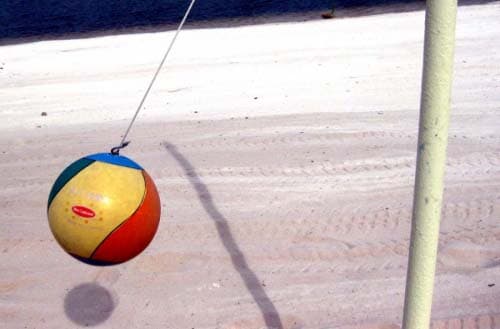 Tetherball, playground game of our childhood. Now, as adults, we may look different on this game, as a simple one, but every child will tell you that's more than just hitting the ball forth and back around the pole. In fact, there are several tactics and strategies that you can apply and in this article, we will show some of them, but also introduce you to the rules of the game.

If you didn't play tetherball in your schoolyard, here's a small introduction. This game was created in Britain somewhere in the 1800s. Tetherball become very popular mostly because of his simplicity. All you need for this game is grounded 10-foot pillar, some rope, and the ball, of course. The game is very prevalent in schools as one of the school activities. It's important to note that tetherball isn't just a game for kids. Today there are some versions of this game where participants use fireball (never try this at home). The standard game, of course, is for every age. One of the great advantages is the ability to play anywhere, from the schoolyard, parks, and even your own backyard.

Tetherball court is defined as a circle around the pillar with a line that goes through the middle of the court. There are two competitors and each of them stays on his line. There are penalties if someone goes to the other side. Tetherball is a game where you are allowed to use only your hands. Using any other body part is also a penalty. Although today there are many versions of this game, "beach tetherball" for example, where you are allowed to use any body part, but in this classic version, only hands are available.

The game begins with a serve from one of the players, very similar to volleyball. Usually, the winner of the previous game will start a new one, but that doesn't need to be a rule. The server can be decided by coin flip or maybe wrestle. The coin flip is the most common method. The service can be done by holding the ball in one hand and hitting it with another or by tossing the ball in the air and then hitting it. The other player waits to hit the ball back around the pillar. It's very important to note that you are allowed to hit the ball only once and if you hit it twice, it's “juggling” and penalty. Only if the ball hits pillar you are allowed to hit it one more time, but only then.

The main goal in the game is to get the ball wrap around the pillar and it must be in the direction you are hitting and the rope is wound. When you are hitting the ball you actually must try to unscrew anything they did before and turn it in your direction.

We also mentioned earlier penalties. Penalties would be hitting the ball more than once, keeping the ball, crossing the line, or hitting the ball with other body parts than the hands. Now the interesting part, when a player gets a penalty, the game is stopped. The rope will be unwound but how much depends on the foul. For example, if you hit your ball twice before it goes around the pillar and it goes around two times, this wraps will be undone! Also, there is an instant loss as well. Instant loss occurs when one of the players touch the pillar or the rope. It's game over automatically.

Although tetherball seems like an easy and simple game, there are many tactics and strategies you can use to outplay your opponents. We will show you some of them.

First of all, vary your hits, try to use different types. Although you are restricted to only your hands, you can use on or two hands. Hitting with a closed fist will give you more power but make sure to hit it with a side of your fist, not your knuckles. An open-palmed strike will give you more control over the ball but be careful with this shot because easily you can grab the ball and get a penalty.

Try to aim as low as possible. It's easy to say, we know, but aiming low with a strong hit will make it very difficult for your opponent to strike back. Angling shot is another great way to control your ball, especially during the serve.

Just like in tennis or volleyball, you can use fake shots in tetherball as well. There is no sweeter point when you confuse your opponent with a soft, gentle shot when he was expecting a hard one. Keep in mind another tactic, you don't have to hit the ball. Let the ball just past you and prepare yourself for the next move with better positioning.

So, now you know the rules and some strategies and you are ready for your first game if you are new to this. You won't have any problems with the playground, it's very easy to set up your own court in the garden or somewhere in the backyard. Also, another great thing about tetherball is that you can practice on your own and apply all of this from the article in the field as well. Good luck!