How to grow a pumpkin? 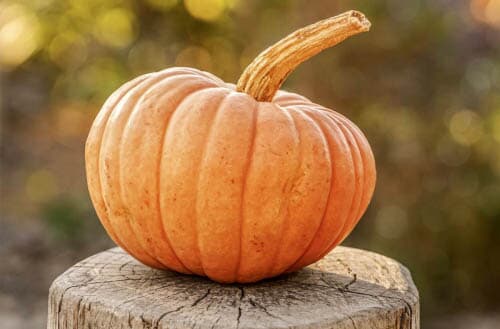 Pumpkin (lat. Cucurbita pepo) is a type of squash. It’s best known as a symbol for Halloween but few of us know how pumpkins are rich in vitamins, especially vitamins A, C, and D. Pumpkins have long stems, broad leaves, and large, yellow, often fragrant flowers. The color may vary from species to species but they are mostly orange. The size of the fruit varies and can reach a weight of more than 300 kilograms and the fruits can be made into oil or flour, but the pumpkin itself is edible, you can make a pie from it, for example. Pumpkins aren’t difficult to grow, but for a start, it’s best to start with a classic, orange pumpkin that you can plant in the yard. When we decide to dedicate to pumpkins, we will have to take three different actions to eventually get a pumpkin:

But before we plant a pumpkin we must meet the conditions necessary for the pumpkin to develop. Also, we need to determine what type of pumpkin we want to plant because the procedure isn’t the same for all varieties.

When is the best time to plant a pumpkin?

As pumpkins are sensitive plants, frost, and cold retaliate in their development so it’s best to wait for some warmer days to plant them. It’s best to start planting in May but the soil should be prepared earlier. Planting time does not necessarily have to be May, your yardstick may be the last frost. As we said, it is important to determine which variety you want to sow. On the package of seeds, it says the time it takes for the pumpkin to sprout so you can calculate what is the best time to sow. To note, pumpkins like warm weather, like tomatoes. Pumpkin can be planted both - outside and inside. If you live in an area where the soil will not be warm, the best solution is to plant pumpkins indoors because they need a long time to mature. Planting inside should start 3 weeks earlier than planting outside and pumpkins should be transplanted outside when the weather is warm and stable.

What is the best place to plant pumpkins?

As we mentioned, pumpkins love warm weather so the best place to plant them would be somewhere where they are exposed to the sun. Seeds should be spaced apart so that the pumpkin has plenty of room to grow. Although they can be really large, the average weight of a pumpkin is 3.5 pounds. If you can, you can plant a pumpkin on a hill. The soil on the hill heats up faster, the pumpkins will be in the sunlight, they will have enough water, and the vine will spread downwards. That way you can even determine their shape. Even though you don't have hilly soil, you can still plant a pumpkin at the edges of your garden but try again to provide them with as much sunlight as possible. Pumpkins can grow up to 10 meters in length, so if you plant them in the yard, you can use flower beds to save space. Avoid rainwater soils as well as soils that don’t contain enough compost, also, windy spaces are not exactly the best choice for planting. The soil in which you plant pumpkins should be moist, deep, and loose. Another great place to plant pumpkins are containers, preferably as large as possible. For planting in containers, it is necessary to prepare the soil in the same way as for planting directly into the ground. If you don't like these methods, be creative and you can come up with your own, new way to plant them, but follow our guidelines.

The process of planting pumpkins

It’s best to sow them directly into the soil. In fall or spring, you need to prepare the soil by digging it deep, putting manure or compost in the soil, and loosening it all. Sow pumpkin seeds in rows, at a distance of at least 120 cm. You can't just throw the seeds, you need to put them a few inches into the ground. After planting the seeds should be buried and watered. On the soil where you sow pumpkins, you can plant earlier those species that are harvested before planting pumpkins, for example, peas but don’t have anything else planted on the ground at the same time as you plant the pumpkins because we repeat, pumpkins can be really big.

While the pumpkin plant is still small, you can dig the soil around but when the plant grows it is not recommended because you can easily damage them. Water the planted pumpkins regularly with the roots, not the leaves! If you haven’t prepared the soil before planting, you can now add fertilizer to make the pumpkin have more nutrients and grow faster. It’s optimal to apply fertilizer every two weeks.

How to water pumpkins?

It’s important to water the pumpkins regularly! Water the pumpkin at least once a week but do not overdo it with the amount of water. An inch of water will suffice. The leaves will probably look dry during the summer heat but don’t let that encourage you to water it too. By watering the leaves you will create a counter-effect, the root will rot earlier. In addition to excess water can cause pumpkin strings, it can also encourage the development of the disease. The one-inch rule applies to the assumption that it didn’t rain a few days before watering. If it was raining, you can skip the additional watering of the pumpkins that week and monitor the further weather forecast.

As with any other species, diseases can also occur in pumpkin growing, mostly bacterial diseases (cucumber beetles are the most common disease). You can prevent the onset of the disease by paying attention to the conditions in which the pumpkin grows. Make sure that the pumpkins are always in a dry place, under the sun, and that you don’t wet their leaves. Mice, snails, and similar species of animals can damage the pumpkin so it would be good to have traps or in some environmentally friendly way to protect against these pests.

When it's time to harvest the pumpkin?

Pumpkins are harvested when they are ripe and in a very simple way we can find out when it is. The color should be bright orange, the stalk should be slightly curled and when we hit the pumpkin a little, we should hear a bell-like sound. After harvest, the fruit should be used immediately so that it doesn’t wither. Although they should be used immediately, we can clean them and store them in a dry place so it will stay ‘fresh’ for up to 6 months. Pumpkin seeds can be saved for next year and then you can plant them.  To note, if you notice that your pumpkin flowers are falling off, don’t worry. The pumpkin has male and female flowers and the male falls off quickly. Female flowers have a bud, like a zucchini, so you can know if the flower is male or female.

If you have decided to plant pumpkins, follow our tips and we guarantee that you will have your own grown pumpkins by fall. You can make fine pumpkin pies, jams, oils, or decorate your yard for Halloween. If we take into account that pumpkins need about 3 months to ripen (depending on the species), then you are ready for Halloween with a little effort and goodwill, if you plant them on time. Pumpkins aren’t expensive to grow, they require care but in the end, it all pays off. We hope we helped you or persuaded you to plant pumpkins. Anyway, good luck!