How long does it take for pipes to freeze? 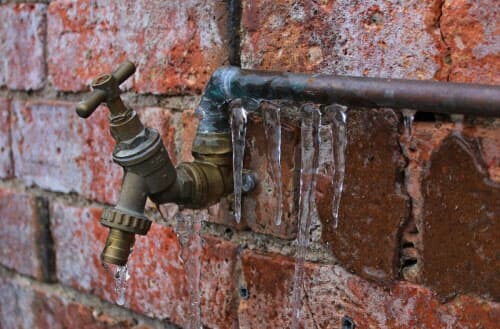 With the arrival of winter, we must prepare for the various situations that this season brings with it. One of these situations that often happens is freezing pipes. When the pipes freeze, it can create a mess in the yard but also an additional cost. So now we are interested in how to prevent the pipes from freezing, how long does it take for the pipes to freeze and at what temperature does it occur? Answers to these questions as well as some tips can be found below.

After how long do the pipes freeze

At what temperature will the pipes freeze

The pipes are frozen, what now

If your pipes are frozen, it's important to defrost them as soon as possible and as correctly as possible. Follow our tips to properly defrost the pipes and prevent more damage.

In order to be able to defrost the pipe, you must first determine which pipe is frozen. Let the water run in the tap and see if the water comes out. If the water doesn’t come out or comes out poorly then it’s likely that the pipe leading to that faucet is frozen. Start the pipe defrosting process near the tap. Now you need to choose the way you will defrost the pipes or which tool you will use. What would help you best at this point is a hairdryer. Point the dryer at the pipe (from the part closest to the tap) and be careful that the dryer doesn't come into contact with water. In addition to a hairdryer, you can also use a portable heater. Bring the heater as close to the pipe as possible and again be careful that the heater does not come into contact with water. Using a heater the defrosting process should be faster than that with a dryer. This refers to the pipes you can reach but what when the pipe is in the wall? If you know exactly where the pipe is in the wall, you can use an infrared lamp to try to defrost the pipe and if that doesn't work, cut out the part of the wall behind the frozen pipe. Then the pipe will be accessible to you so you can use the hairdryer or heater again. The defrosting process of pipes located in the wall can take up to 12 hours. Never try to defrost the pipes with a burner or torches! If you notice water from the pipes splashing, close the valves in the house and call a plumber.

How to prevent pipes from freezing

- insulate the pipes as best as possible, this is the safest way to avoid icing the pipes.

- don’t place pipes in the attic or in walls that have holes. The cold wind will only speed up the process of freezing the pipes.

- install electric heaters next to pipes that are automatically activated at certain temperatures.

- stagnant water freezes quickly so let the water flow from the tap at low temperatures.

- provide warmth in the house and if you go on a long trip during the winter, turn off the water completely.

When you decide to defrost the pipes, you take two risks. The first is that a fire can occur and the second is that pipes can crack. Therefore, try to prevent your pipes from freezing by increasing the heat and maintaining heat during low temperatures, leaving the tap to drip, additionally insulating the pipes, and closing the valves on those pipes that you do not use. When you see on the weather forecast that the temperature will be extremely low for a long period of time, start preparations to prevent the pipes from freezing.