How do I get my chainsaw to idle? 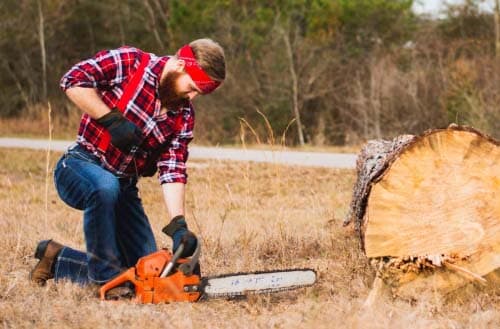 You might have noticed that, while workmen are using their chainsaws, they may often set them aside to do something else quickly. Rarely are they turning the chainsaw off during this time, but rather set it aside to “idle”. So what is idling?

Idling is the action of running an engine when it is not in motion. You might have idled yourself when in a car and waiting on a stop (you can do this with both manual and automatic shift driving, although the latter is generally not recommended). For chainsaws, the act of idling is super important, since it will allow for smoother performance.

This article will delve into potential problems that can arise with chainsaws which may prevent your saw from idling properly and reduce the efficiency of your work and maybe even damage the device if you do not fix it in time.

How does idling occur

A chainsaw normally has a two-stroke engine that uses a mixture of air and fuel to power itself. To do this, there is a part called a carburetor which is responsible for mixing these ingredients in very specific ratios. When you push the throttle, there is more gas added and the chainsaw will rev up to faster speeds. When you let go, it should go back to idling. But what if it does not, and you have problems with it either not starting, starting but idling for only a short time before shutting down or even revving up and down on its own?

Most chainsaws nowadays have an air filter that is easy to get to so you can clean it regularly without too much hassle. Filters are usually completely reusable unless damaged, so simply clean it out. While it is best to use compressed air, in a rush you can also simply tap the filter to clean out any debris. Use a rag to follow up and clean out anything remaining.

Be sure to watch out for air filter damage – be sure to change the filter if it has holes in it or even if you notice debris in the saw intake. Your chainsaw will be thankful.

Spark plugs are used to ignite the gas with a – you guessed it – controlled spark. This part of the machine is used so often it is no wonder it gets damaged a lot – whether there are cracks in the porcelain insulation or problems with electrodes – a damaged or burnt spark plug will not be of much use. The chainsaw may not start at all or start without being able to rev up properly, making it basically useless. Inspect your spark plug and change it immediately if you see any physical issues on it – although changing your spark plug is recommended every so often – every 100 hours of usage is a good baseline.

Chainsaw fuel is delicate. You should never use old gas mixtures since the internals is finely tuned. Therefore, be sure to remove the old fuel, especially if it has been sitting for a while. Some fuel ingredients evaporate fast and leave around a dense and sticky mixture which can act as sediment to the new fuel mixture, clogging up the fuel filter in the process. This can be avoided by never using the old fuel and changing your fuel filters once in a while as well. Check the fuel lines as well, as the tubing may corrode from the ethanol in gas, so these may be up for a change as well.

Adjust the screws on the carburetor

This one is the biggest doozy of them all. Carburetors have little screws that are responsible for the mixtures at different levels of chainsaw operation. There should be at least two of these screws on your chainsaw. One is for the lower rpm levels, and the other one is for the higher ones. You should not tamper with the one for high rpm levels, since you can easily blow the engine. While manufacturers usually install limiters just, for this reason, you should not push your luck.

When adjusting the screws, be sure to consult your manual since no manufacturer is the same and they may use different labels for different adjustments.

Your chainsaw will probably have three screws – one for low rpm, one for idle, and one for high rpm. Tinker with the first two first and check if it has done the trick before messing with the high rpm settings. Fine-tuning these two will most likely lead to the resolution of your problem, and you will not have to bother about the screw which controls high rpm levels.

While these are not the only issues that can plague your chainsaw, they are among the most common ones. If your chainsaw is having problems with idling, be sure to check both air and fuel filters, the spark plug, and adjust the screws on the carburetor. Be sure to have the manual in the vicinity as you do not want to make things even worse than they are – and remember – a chainsaw is a very useful but equally as dangerous tool. Always defer to the opinion of professionals – if the repair work is too much for you that is completely fine. The shops are always looking to help you, and it will be very worth it in the long run, even if you would rather save the money today. Perhaps the professional help will see something you would not, and save you the additional hassle.