How to hide a key outside an apartment or house? 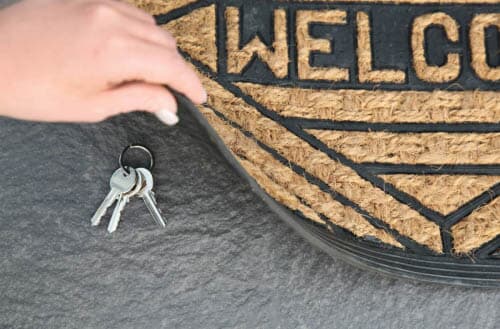 Have you ever found yourself in a situation where you forgot to bring your house key or forgot where you put them? We're sure you are. It can also happen that you lose the key without even noticing it until you come to the door and realize that you have nothing to open it with.

It’s important to keep the keys safe so that burglars cannot enter the house. For these reasons, it would be wise to have a spare key hidden somewhere only you and your family know. We will suggest to you some great ideas about how you can hide the key without anyone finding it, except you of course.

Would you put your hand in a nesting hornet? Neither would we. Someone who doesn’t know it’s actually a fake nest wouldn’t even think you hid the keys in there. This is a great idea because the nests are most often located near the front door. Make a fake nest yourself, drill a hole the size of your spare key, and hang the nest above the door. A slightly simpler idea is to hide the key in the birdhouse but you should know that burglars would look there rather than into a hornet’s nest.

The rocks blend very easily with the environment so they become almost invisible. You can buy them or make them by yourself. When someone looks at all the rocks you have in the yard, at first they will look the same and certainly won't take one by one to check if the key is hidden in them. You won’t have this problem because you’ll know exactly which rock is ‘fake’ and where the key is. In addition to stone, you can also use bricks.

Place the key in a plastic container and cover it with a drain cover. Bury it in the gravel so that the cover peeps out. You can do the same with the faucet head. Things like this are often seen in the yard, so they won't attract anyone's attention while looking for the key.

Buy an outlet that is also wall safe. When you set it up, you can open it and hide things like money or keys inside. They are also imperceptible and we believe that no one would want to push their fingers into the current. This method is great for people who live in buildings and don’t have the ability to hide keys on trees, in rocks, or somewhere like that. It’s definitely a better idea to have this ‘wall safe’ than to put the key under the mat. Also, the outlet is very easy to set up and it will only take you a few minutes.

Under the floor mat of your car

If you own a car, it can be great for hiding important things, like the keys in this situation. In most cases when you leave the house you go by car and when you need to enter the house, the car is parked in front of it. You don't necessarily have to hide the key inside the car. You can also hide the key behind the license plates with the help of magnets or hammers and nails. This means that the spare key will always be near you.

If valuables and money are kept in safes, then it's certainly a great idea to keep the keys ‘locked’ as well. Buy a lockbox and set a code that only you know. The box is almost impossible to open unless someone hits the right combination. This way you can be sure that your key is safe.

It’s common knowledge that dogs are excellent guardians of your yard. If you have a dog that barks at strangers then this is enough assurance that no one will dare go inside. If your front door is in front of the yard, place a spare key in the dog house. Unwanted visitors certainly won't risk making the dog even angrier by trying to enter his house.

For dog owners, we have another funny but effective idea - fake dog poop. All you will need is glue, brown paint, and a little plastic to stick the key to. When you make the poop, bury it lightly in the ground. There’s no way any burglar will take a dog poop in his hands and the key will be safe.

As much as you think your keys are safe, it would be wise to change the place where you hid them from time to time. Whichever place you choose, be sure it's not visible and that it's unpredictable. Of course, there is no point in hiding the key under the mat because it is the first place that any "intruder" will look at. Be imaginative to keep your keys well hidden. The most important thing is to make the place so unusual that no one could even think that there are keys inside. If you come up with some ingenious ideas except ours, let us know.