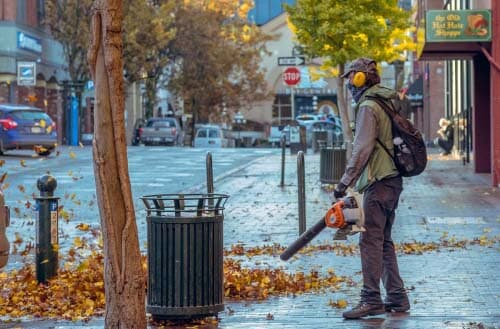 While it is fantastic to walk through the greenery in your own front or back yard during spring and summer, when fall comes, the story changes. Even though the atmosphere can be nicer with the leaves changing their color, disaster will soon strike. These leaves will soon leave their homes on the branches and start falling everywhere! Yes, you might be tempted to just leave them there, as they will decay in time, but it simply does not look that great.

The need to remove these leaves doubles if you walk around these areas a lot, as leaves tend to retain moisture during the rainy season and make the surfaces slippery. There is no need for you to risk injury if you do not have to, is there?

However, before you get your rake out of your storage shed and start raking, consider the easier (albeit pricier) alternative – leaf blowers. Leaf blowers are devices which use vacuum-like motors to produce blowing air to move the leaves. They are, therefore, used to move a bunch of leaves at the same time to a place where you are going to collect them. This is different than a leaf vacuum, which does not blow away but rather blows in the leaves. In this article, we are going to focus on leaf blowers and their different kinds, such as gas and electric leaf blowers.

So, as mentioned, the source of fuel for the leaf blower can be either gas or electricity.

Let’s focus on gas-powered blowers first. They come in two models – they can be either handheld or backpack and contain either a two-stroke or a four-stroke engine.

It is safe to assume that gas-powered blowers will be more powerful, and you would be correct in this assumption. Two-cycle engines are actually the more powerful ones, however, they are a bit noisier than their four-cycle counterparts and pollute a bit more – all gas-powered leaf blowers release smoke which hurts the environment.

Gas blowers are typically pretty heavy – especially if you want a more powerful one – but that is why you can choose and get a backpack blower which is easier to carry around even with added weight.

The price of gas blowers can vary a lot – with prices starting at 60$ and reaching up to 400$ with more quality ones.

When dealing with a gas-powered device, you know that you are not limited by anything except the amount of gas you have. You can do large amounts of work and cover large areas, but definitely be mindful of how much additional gas you will have to bring with you.

Gas blowers also require regular maintenance. While at the start this is usually done by making sure you mix in the correct oil amounts when needed, later on, you may have to clean or change specific parts. This will, however, mean that your gas-powered blower will probably last quite a bit longer than an electric one would.

Pros: Power, long-lasting with proper maintenance, only limited by how much gas you bring with you

Electric blowers are usually a lot lighter than gas-powered ones since the motors are simpler and smaller and therefore come mostly in handheld varieties. The lack of a gas-powered motor means that you will not have to service it or worry about oil and gas storage. It also means you will not have nearly as much power available, so expect to stay out a bit longer.

They also do not pollute by themselves since there is no smoke, and you are limited to the pollution which occurs while electricity is produced in the power plant.

The sound that electric blowers create is not comparable to gas-powered ones – they are a lot more silent. Therefore, you do not have to worry about your neighbors screaming at you if you like to do your work early.

The biggest pro of electric blowers is their price – they are clearly aimed at a market consisting of people who do not plan on using it for large areas and therefore do not need too much power. It is not nonsensical to trade price for lack of power if you have no need for latter. Electric leaf blowers range from 30$ to 200$ for higher-end models.

As their name suggests, these blowers have a cord that leashes you to the nearest electrical outlet or extension cord. Therefore, they are best used for smaller areas where you will not tangle your cords around every tree while walking around.

You would think that cordless blowers would remove this inconvenience and would, therefore, be perfect for smaller amounts of work – and you would be correct. Well, not exactly. The biggest problem with cordless blowers is that their battery is usually extremely bad and has a short life. You will usually be limited to 15 to 30 minutes tops of work before having to recharge. Some people solve this by buying batteries which are of higher quality than the ones which come with the device itself, however, this can cost quite a bit – and with the biggest benefit of electric blowers being their price, just how much sense does it make to buy something that may cost you more than a gas-powered blower would?

Pros: Cheap, non-polluting, easy to use and maneuver with, no need for maintenance

Cons: Either an inconvenience with a cord or short-lived if cordless, less power

In the end, just follow what is right for you. There is no obvious clear answer – electric blowers, whether corded or cordless is usually cheaper and more suitable for smaller amounts of work, whereas gas-powered blowers pack quite a punch but require more work to keep them running as well, ranging from keeping them fueled to regular maintenance.