My dog ate a dead bird. Should I be worried? 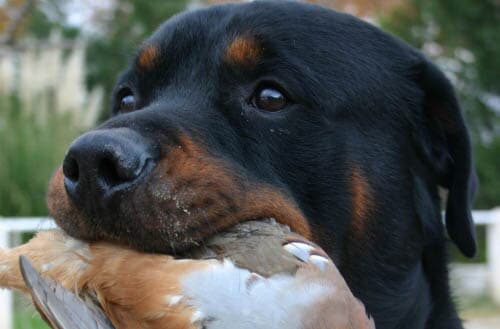 Dogs are very insatiable animals. No matter how much food we give them, there always seems to be room in their stomachs for more. Unfortunately, dogs don’t only eat the food we give them but on the contrary, they often eat exactly what they shouldn’t. You found yourself in a situation where your dog ate a bird but that’s not all - the bird was dead.

To comfort you, your dog isn’t the only one to whom this has happened, situations like this often happen. There is no excessive cause for concern. The dog will have digestive problems (diarrhea and/or vomiting) that will go away in a day or two. Of course, these are the most likely scenarios but there is always an exception. After such a "wonderful meal" observe the dog for a while.

If you notice that your dog is behaving strangely or differently than usual, it’s time to visit the vet. Even if you take your dog to the vet, don’t think of the worst. Dogs are more resistant than humans when it comes to spoiled food or food that shouldn't be eaten. Your dog certainly won't die after eating a dead bird.

The bird (alive or dead) won't cause major problems to your friend but if you notice indigestion, you can take the following steps to help him:

1. Don’t feed the dog for the next 24 hours. After the dog has eaten the bird, it’s necessary for him to digest such a meal and for his stomach to be emptied. Instead of food, give your dog more water to prevent dehydration, especially if he is vomiting.

2. After 24 hours have passed since the dog was without food, don't immediately give him the portions to which he is accustomed. Give him food in smaller portions, increasing the amount each day until you finally reach the amount the dog normally ate. It would also be good to give the dog food several times during the day, but in smaller quantities, than to serve him food in one larger meal.

3. Don’t take your dog for walks, excursions, or other activities until his digestion is completely normal or in other words until his stool becomes the same as usual.

Since we mentioned that these situations are more common than you think, you’re probably wondering:

Why would a dog want to eat a dead bird next to the food you give him?

Dogs have an incredibly good and strong sense of smell. While the smell of a dead bird or some other animal repels us, they will be attracted by such a strong smell. A dog while playing or even often out of curiosity will try to eat everything. Don't let that surprise you. The dog will try to eat a live bird as well, but it's more common because of the smell to try to eat a dead bird first. Playing with dead animals is innate to your dog, they inherited it from wolves, their ancestors. Although your dog, for example, lives in an apartment and not outdoors, they are innate to hunt other animals. A dog can kill a bird on its own and eat it, and that is perfectly normal.

However, in addition to digestive problems, if a dog has eaten a dead bird, salmonella infection isn't excluded either. For this reason, you must visit a veterinarian if you notice any changes in your dog. Observe his behavior and feces but be sure to protect yourself by using gloves while cleaning the dog. Therefore, let the dog rest without food for a while and if you don't see any improvement within 24 hours, visit a veterinarian.