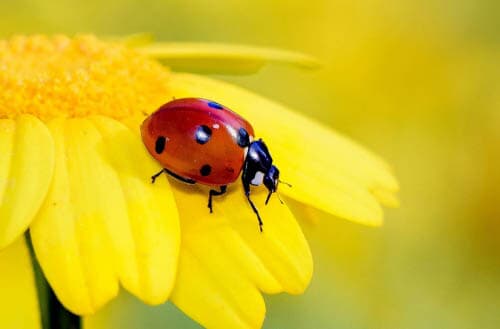 If you were asked to think of one insect you don’t mind, which one would you choose? Surely most of you would choose a ladybug. Ladybugs are small cute insects that don’t do any harm so we don’t have to look for a way to get rid of them. On the contrary, ladybugs are believed to bring good luck! It’s time to get to know these little creatures a little bit better.

What ladybugs feed on?

Aphids are the most common food for ladybugs. Gardeners love to see them in their garden because they know that ladybugs will eat most aphids and may not even have to spray their garden to get rid of these pests. If you do not have ladybugs in your garden, you can buy them to prevent aphid infestation. To note, one ladybug can eat up to 50 aphids during the day and up to 5,000 in its lifetime. In addition to aphids, ladybugs feed on plants, mites, molds, whiteflies, and other insect species.

No, ladybugs don’t eat ants but there is contact between these two types of insects. Aphids attract ants because of the honeydew they produce which ants eat and ladybugs eat aphids and that leads to conflicts between them. Ladybugs want to eat aphids and ants want to preserve them. Besides this, there are no other links between ladybugs and ants. Ants protect aphids due to their sugary waste material. They fight other predators that try to eat aphids, including ladybugs. Ladybugs don't have much of a chance against such fighting ants. They will not even defend themselves when they encounter a swarm of ants that protects aphids but will fly away to another place. In fact, there would be no winner in that ‘conflict’. Ladybugs are not hostile to ants, they only have different interests.

In which case will the ants attack the ladybugs?

1 - When a ladybug lands in an ant nest

When ants sense that something has approached their nest, they will consider that insect a threat and will try to remove it from their vicinity. The ants attack to defend themselves and it is up to the ladybug to try to escape because otherwise, the ants will trample the ladybug.

2 - When the ladybug approaches the aphids guarded by ants

As aphids are found on a leaf, not all ants can be exactly on the leaf. Therefore, the ladybug will be able to eat aphids but ants will disturb it. If the ladybug stays on their list for a long time, the scenario described under number one could happen.

When ants attack a ladybug, there should be as many of them as possible to bury the ladybug. They drag the ladybug's legs and try to kill her and if they succeed, they will take the ladybug to the nest and eat it. In addition to retracting their legs, ants bite the ladybug and disperse formic acid. The only way for a ladybug to survive that attack is to fly away in time.

Will ladybugs cause damage?

Ladybugs will not cause any damage to your garden or home. In the garden, they will be useful because as we have said, they eat aphids. If you have plants in the house, then you can keep ladybugs in the house for the same reason. Just be careful to include those ladybugs that eat aphids because some species do not feed on aphids. Also, don’t worry, they won’t cause problems for either you or your pets. But still, be careful with the number of ladybugs you ingest because they emit odors that can attract other insects and you don’t want them.

What if you don't want a ladybug in your home?

If a ladybug still shows up in your house without you wanting it, don’t kill it. Let the ladybug come out on its own and help your garden by eating aphids. If this is not possible, then vacuum the ladybugs, do not crush them. They contain substances that can contaminate the place where you kill them.

It’s amazing how nature works. So small insects can be very combative and cohesive to defend themselves and what they keep. Therefore, ladybugs don't eat ants but sometimes in nature ants who consider ladybugs a danger, will fight and eventually eat them. You can see the fight between ladybugs and ants very often during the summer, they are very interesting to watch + you can help the ladybug to save itself and take it to the plant in your home so she can help you!