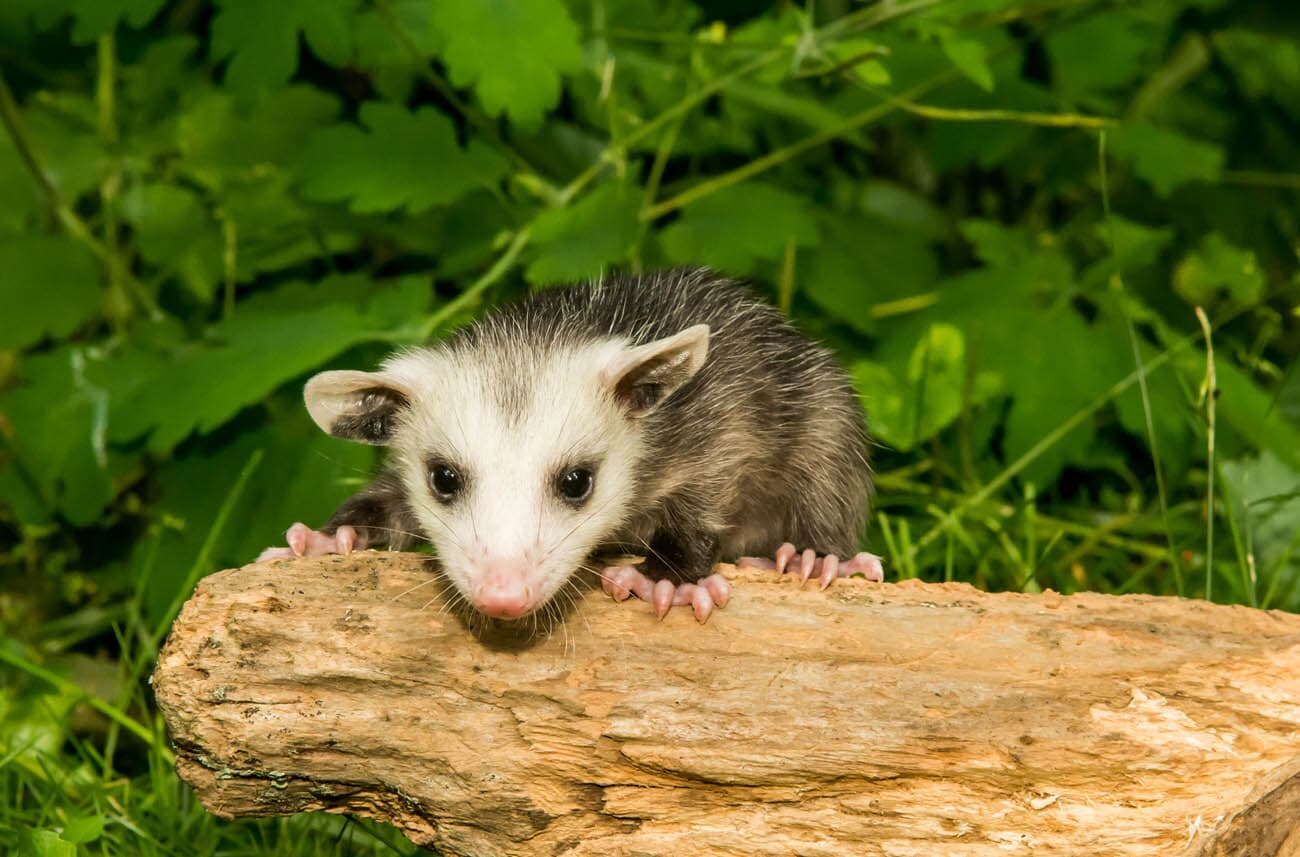 North America is home to one very interesting marsupial species, and we are sure you have heard of an opossum. These animals are related to kangaroos and koalas, and they also can grow baby animals in their pouches. Opossums are mammals present only in America and rarely seen in Australia. They are usually up to 20 inches long and 14 pounds heavy, and it’s not uncommon to see them without a part of their tail or their ear, as they often suffer frostbites.

Opossums are also very scared of humans and other predators, and they often growl, screech, and produce screaming-like sounds when they are in danger. They have eating patterns similar to those of raccoons, and while foxes and raccoons usually carry their food away, opossums will chew the food into small pieces that you will often find left behind. They are quite messy.

They eat meat, plants, fruits, and grains - they go out at night because they fear humans and eat anything they can find. However, if the weather is very cold, they don’t migrate - these nocturnal animals live in solitude and have a pretty bad reputation.

So, Do Baby Possums Play Dead?

Many people know about opossums because they have seen the act of an opossum playing dead. This is quite an interesting reaction that doesn’t happen with many animals, and it’s a purely physiological response. It’s not a choice, and the opossum cannot control it – the “playing dead” is automatic. It’s basically a comatose-like state caused by shock and stress.

Just like a grown opossum plays dead, a baby opossum does the same thing. It’s just something they are born with, and it’s not a choice or free will. So many cartoons paint opossums as animals that have a choice to pretend, but this is truly not the case.

This unconscious state can last up to four hours, and the animal really looks and smells as if it was dead. They even put their tongue out, so they start to drool. After that, they cannot move, and their body becomes completely limp. This is a great attempt at protection and defense, as a predator won’t be as interested in a dead animal, especially if it smells particularly bad.

So yes, both baby and adult possums play dead, and it’s in their nature. If you see a possum playing dead, the best thing you can do is move it somewhere really far from your home or your backyard. Killing it can often be a gruesome act, and this way, you get to protect your own property without killing the small animal.

It’s often best to leave the “killing part” to nature and the wild’s cycle of predators.  When the possum leaves the comatose state, it often travels away from the last place where they felt threatened, meaning the chances they’ll revisit your house are quite small.

Are Opossums And Possums The Same Animal?

The difference between “opossum” and “possum” comes from the geographical location of those speaking about the animal. There is no difference between an opossum and a possum, and it’s just a different word for the same species. The Virginia Opossum, also called Didelphis virginiana, is the most famous opossum species, and you’ll see people call this animal both a possum and an opossum.

Possum might be a more usual term not used by biologists or scientists, while the word opossum stays reserved for professionals and those who pay attention to technicalities. However, there is no difference between voicing and not voicing the first letter, so do whatever feels more natural.

What Animals Are Predators Of The Opossum

Since opossums are very annoying and create a lot of mess, nobody really enjoys having them in their backyard or near their homes. Neither people nor animals want to have opossums by their side, and that’s why they attack them. A possum can be quite small, and its size ranges a lot, which is why baby opossums often become a target – they’re pretty helpless.

Some of the commonly mentioned predators that kill opossums include owls, foxes of all kinds, cats, dogs, even hawks… But, of course, humans can be seen as predators too. Although not all of these animals eat opossums, they will kill them if they see them nearby as they see them as a threat or an annoyance.

Humans tend to kill opossums due to their bad behavior and leave a mess everywhere they eat. They also stench pretty badly when they act dead, which is why humans move them away from their homes and call exterminators.

What Is The Lifespan Of An Opossum

An opossum generally lives anywhere from one to two years. This short lifespan isn’t their biological destiny, and their predispositions are actually much better. Still, the fact that so many predators are looking to kill them makes it tough for them to outlive the span.

The opossums that live the longest usually stay in their den quite often and avoid contact with their predators. Also, those that live far away from humans, on the side of a forest, or somewhere near a river or lake usually have better life spans due to better living conditions.

Opossums are quite annoying to most people, as these marsupials create a lot of mess and lots of noise. There are many predators after them, but opossums tend to protect themselves by playing dead. This physiological response is a characteristic of both adult and baby opossums, and it’s something that the animal cannot control.

Although they try to protect themselves, their lifespans don’t reach anywhere past two years. This is why they remain exclusive to the area of North America, and it’s very uncommon to see them anywhere else. This natural cycle has to be balanced, and if it is not, there is often a need for an exterminator. Now and then, you can notice a “pandemic” of opossums in America and, more often, Canada, which is treated very seriously.