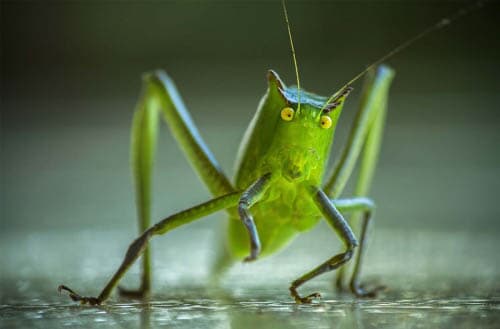 Over the years people have farmed a lot of things. Plants are an obvious choice – whether it is corn, wheat, or perhaps tomatoes, plant farming has been a thing for a long time. Some people prefer to farm animals instead of plants. They can farm sheep, pigs, cows, but it is also possible to farm some other animals which are a bit more uncommon, such as snails or even snakes.

This article will talk about one of the possible farm animals that are on the weirder side, and this animal is the cricket. Yeah, we are going to talk about how to farm bugs.

When you see a cricket in your home, it is most likely that your first instinct is to take a slipper and proceed to stomp it. Well, maybe this article will change your opinion. While disgusting to most people, crickets are actually really healthy. There is a reason why they are one of the most commonly found animals in other insects’ intestines. They can serve as an amazing food source, however weird that may sound.

Crickets in other cultures

While crickets can be found all over the globe, their usage as pets and food stems mostly from Asian countries. It is said that in China they actually use crickets as fighting animals, as inhumane as that may sound. They also sell them as caged pets.

In other Asian countries, especially in the southern part which houses countries such as Thailand, Vietnam, and Laos, crickets are consumed as a snack after being cleaned and deep-fried. It is estimated that Thailand on its own produces more than 7,5 thousand tonnes of crickets per annum.

Therefore, it seems cricket farming is not a huge deal in other countries. Why not jump on the ever-growing hype train and start your own cricket farm?

Unlike other farm options that require vast amounts of free farmland, cricket farming is a very viable farming choice to do basically anywhere since crickets can be farmed both outdoors and even indoors. They are small enough to not require huge amounts of space. Just be careful not to accidentally release them all over your house.

So, why choose crickets as your farm animals?

Well, the first reason is already given. If you want to have either sheep or cows as your farm animals, the first obstacle you are going to find yourself facing is the fact that they need huge amounts of farmland. Both of these are grazing animals which eat most of the day, and for that, they need to walk around and find their own grass to eat. This requires significant investment if you do not already possess significant farmland. Pigs and chicken may require less room, but they still need a building that will serve as a shelter. So do rabbits, which need their enclosures.

As opposed to this, crickets are kept in storage bins. You can go to the local general store and pick up a couple of storage bins. We’ll get into how big they need to be later on.

Yeah, we get it. Eating bugs is gross. However, hear us out. Crickets are an amazing protein source. In 100 grams of crickets, if fresh you will find 20 grams of protein, which is close to or on par with chicken! If dried, in 100 grams you can even find close to 70 grams of protein! That is literally unparalleled in the animal world. On top of this, crickets also have very low calories numbers, which makes it a perfect diet food and/or a great low calories snack. You know, once you get all over the whole “eating bugs” thing.

What’s even better is the fact that crickets can be used as a secondary farm animal to supplement your original farm animals or even pets with a live feed. All the above-stated diet benefits apply to animals as well. Cats, dogs, birds, fish will all eat crickets and love it.

In today’s world, it is not expected that your farm will be used only to keep yourself fed. People expand or even create their own markets, and it is safe to say that cricket farming is an almost untapped market.

The biggest way of making money with a cricket farm is selling them to pet shops that will use them to feed their animals. Other people may want to buy cricket products – one of the biggest ones is cricket flour. While this is not something you may want to do at the very beginning, it is worth mentioning that cricket flour can be used in a variety of ways, as its contents allow it to be an additive in foods such as pasta, bread, protein bars, food for pets and livestock feed, etc.

It is even stated that the potential that cricket farms have can be one of the solutions to the growing food crisis in the world over the coming years. So, why not start now?

A small cricket farm is very easy to set up and startup. If you follow these steps, you will have your farm running in no time whatsoever.

You will need live crickets (around 500 of them), a storage lid which has smooth walls, and is tall enough for the crickets not to jump out of. To be safe, go for a 20-gallon storage bin. You need two of them – one for the adults and one for the baby crickets.

The most important thing when breeding crickets is the temperature – you need to keep them at a constant temperature of 80 to 90 degrees Fahrenheit (32.2 degrees Celsius). The closer to 90, the faster they will breed, but you should not go over this limit.

You should not forget about the ventilation either – cutting small holes in the lids will be enough so the crickets do not suffocate. Cover it with window screen – it will have holes big enough to allow air in and out but small enough to keep the crickets inside.

Put egg cartons in the bin to allow crickets to have a “residence” of sorts.

The crickets will have to do their business somewhere – if you put material such as vermiculite at the bottom of the bin you will make their environment that much cleaner.

Crickets’ are very sensitive to humidity – placing two water-saturated sponges in plastic containers that are accessible to the crickets is fine. Just put the containers at the roughly same level as the “ground” you have created.

A plastic container for food should also be put in, following the same rules of height – keep it in line with the ground.

One plastic container should be filled with soft, clean topsoil. This is where the females will lay eggs. You should again fit it with window screen to prevent cannibalism since crickets can sometimes eat the eggs.

A heat lamp should be used to allow for a constant temperature boost. Bigger farms will require stronger lamps.

Caring for the adults

The biggest worry is their food and water. Crickets eat a lot of things and there is even commercial food for crickets, but it is recommended that you keep them fed by giving them scraps that would usually go to the trash or the compost pile. Fruits, nuts, vegetables, and grains are all more than fine. You should, however, keep track of their food supply, and remove whatever goes moldy since the humidity will be quite high.

For water, they will drink from the sponge, but you can also keep a small supply of water inside the container as well. Keep it low, however, so the crickets do not drown while drinking. Around ¼ inches of water height is plenty.

You should keep the bins clean – simply move your setup to the second bin, clean the container, and dry it off.

When you hear chirping, it means that mating has begun. After 7 to 10 days you can expect the soil you put in the special container to be full of eggs which are similar to rice grains. During this period, you should spritz water on the egg container to keep it moist. After the period, place this container in the second bin where you should keep it warm and humid – this basically follows the same rules the first bin did. Inside of a week, a new batch of crickets will begin hatching and you will now have two bins of crickets! Be sure to give them food and water.

After two months you should expect to have your first cricket harvest. Harvesting is done by putting the whole bin into a freezer. This will kill them painlessly, as they go into a state of hibernation from which they will not wake up. If you do not have a big enough freezer to fit a bin, then you can put the egg cartons into bags that you can put in the fridge, which will slow them down enough to later be easily scraped enough into smaller bags which fit into the freezer.

After this is done, you can do whatever you wish with the harvested crickets. Eat them whole, give them to your pets or grind them into flour – there is a bunch of possible options. Whatever you choose, we are sure that this experience will be different from what you have expected when going into this business.

While crickets may not be the first thing that pops into your mind when thinking about starting up a farm of your own, they are far from the worst one that you may be farming. They are exceptionally easy to start with, do not cost a lot and do not require a lot of effort if you follow the steps religiously.

The main draw of cricket farming is the fact that you do not need a lot to get started – a couple of bigger storage bins and a couple of egg cartons with around 500 crickets is enough to get a solid farm started.

The care of crickets is pretty straightforward, with your obligations being keeping a constant amount of water in the bin – be mindful not to put too much otherwise your crickets will drown – and providing them with food which you will keep from getting moldy.

Otherwise, keep the bin warm, humid, and clean and everything will be fine.

Getting new batches of crickets consists of moving the babies into another bin and caring for them as you would for adults, with the addition of spritzing the container once a day while they are still in egg form.

The crickets have a relatively short life cycle when farming, with them living for around 2 months and then being ready for harvest. Harvesting is also very easy. Simply put the whole bin into the freezer, or if impossible, refrigerate smaller batches and then put them in the freezer. This will kill them in a humane and a clean way. Then you may remove them in order to use them as food or grind them into flour. Both choices are valid and depend on your interests.

Whether you decide to keep crickets as personal food – if you can get over the “ick” factor – as animal feed or for commercial purposes, one thing is clear. Crickets are a young, still untapped market with enormous potential for success on all fronts. Serious farmers may turn a steady profit which could increase with crickets increasing in popularity, especially so if they start gaining traction as an alternative food source.

Hopefully, this article has made you at least consider taking up cricket farming as a hobby or even getting serious about it. Getting over simple taboos such as bugs being disgusting can potentially be a huge thing and who knows, you may even get a steady source of income in the process.