Can you eat koi fish? 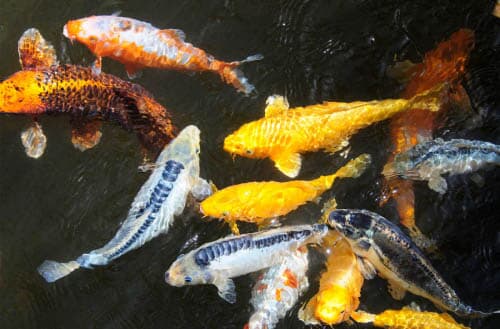 Koi fish is one of the most expensive fish in the world. It’s recognizable by its golden/copper color. This fish usually stays in open-air koi ponds so that everyone can admire its beauty.

There are various types of koi fish and their breeding became popular in Japan during the 19th century. Besides being expensive, this fish has a special meaning in Japanese culture. The Japanese believe that koi fish will bring prosperity and happiness to those who own it.

Koi can live more than 25 years and their size depends on the species. If you’re lucky enough to own a ‘goldfish’, have you ever wondered what it would taste like?

Koi fish, just like carp, feed on everything: algae, fruits, vegetables, and even other fish, and because of poor nutrition, carp are often bad-tasting fish. You know that famous saying 'you are what you eat? If so, then we can conclude that carp isn’t exactly a quality fish that we can find on the menu of a fancy restaurant.

His main advantage is the price, which is lower compared to other fish. Unlike ordinary carp, which can most often be found in polluted waters, koi fish are located in their own waters. The water in their ponds is cleaner, and the fish have more space and feed better than ordinary carp. That means that their taste is better than the taste of carp but also more expensive.

Yes, you can eat Koi fish. We know there is a lot of poisonous fish but this freshwater ‘carp’ is not one of them. To prepare koi fish you will need a little more time than to prepare carp because they have harder skin and texture. You can cook the fish (the optimal time is 15 minutes) or fry it. Even though fish is edible, it’s not recommended. It’s up to you to decide whether to eat it or not.

Why shouldn't you eat it

Of so many different fish that you can serve as a meal, why would you really want to eat this expensive and wonderful fish? There are so many animals that are technically edible (e.g. swan) but because of their beauty, we don’t use them in the kitchen.

Simply, it's not socially acceptable to see this magnificent creature on a plate, nor any other fish you have in an aquarium. The fact that koi fish is a type of carp, which is a common food in the kitchen, doesn't mean that it must become food.

Besides, killing a pet looks horrible, no matter which animal you have.

If these reasons aren’t good enough for you to give up the intention of serving this fish as dinner, think again: by killing koi fish you disrespect Japanese culture. Imagine you are Canadian and someone serves you a beaver, how would you feel? We believe this would make you angry and you would feel that your host is disrespecting you. The Japanese would feel the same way if you served him this precious fish.

Koi is an edible fish. You won't be poisoned nor will anything bad happen to you if you choose to eat it but because of the culture and the beauty of this fish, as well as because of its price, try to choose another type of fish for your meal.
Even carp can be a great dinner with a little spice and a side dish, so consider that option and it will cost you only a few dollars.