Can I shoot a possum in my backyard? 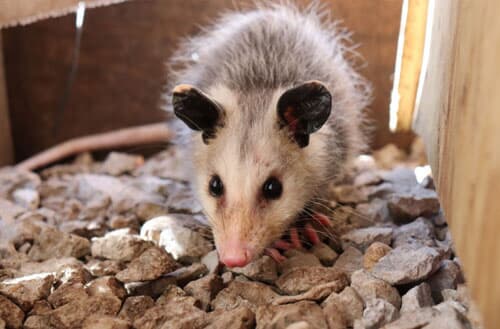 Just like raccoons, possums are also uninvited guests in your backyard who can do a lot of damage. Many people see them as pests who ruin your garden, knock over your garbage, or even kills chickens. You can find them mostly in eastern parts of the United States. They prefer forests but also can be found in the presence of humans and live happily in such conditions. The real question is can I shoot a possum in my backyard if he does the damage?

Legal issues with killing a possum

There are many factors included in this problem. Firstly, it depends on your state and local level. In some places, possums have legal status as game animals and some people even eat them. So, just like hunting deer, it is very possible if you can go for them, you will be able to do that only certain hours of the day and that includes trapping hunting or both. Also, in some states, you will need a license to hunt or kill a possum.

Most states don't allow using any kind of gun near public places, but if it's legal you will probably get instructions on what kind of gun you can use and in what conditions. It's very important to research all regulations.

How to deal with possum

The first thing you need to do is to detect your problem. Possum has a special footprint with five toes in both front and back and you can find them easily near water in the mud. Like raccoons, they operate at night so it's not easy to catch them on the act. they are also great climbers so if they spot you first they will be far gone until you react.

But possums are unique for one thing, it's their ability to play dead. If you try to shoot them, they can be very tricky and just lay down with tongue out and eyes closed, so don't get too close until you're sure they are really dead.

If for some reason you can't shoot possum in your backyard, don't worry, here are some other solutions for you. Possums are not too picky about food so get rid of any food source in your backyard. Keep inside pet food during the night, keep your trees trimmed near your house as well.

Another piece of advice is to put a chimney cap to enable them to get inside your house and consider trapping options if you can't shoot them.

How to trap possum?

When you found out where is his hiding place and his routine, the next step is choosing a cage for your invader. These traps come in all sizes and versions but it's important to choose big enough for the animal to get in. Once you did that, put your cage on route possum use. Also, choose a bait with a strong smell like fish and if you did all of this the right way it shouldn't take too long before he gets caught. You can try to poison the animal but it's not recommended because poison won't be so effective and you can hurt other animals or people.

One thing you also should know is that possums aren't mean animals and they will also try to avoid you. They aren't mayor carriers of rabies and they live four years, max. So the question can you shoot one of them in your backyard depends on laws and state. After you got an answer from them, you'll know how to react and these tips will surely help you.