Can a volcano pop up in your backyard? 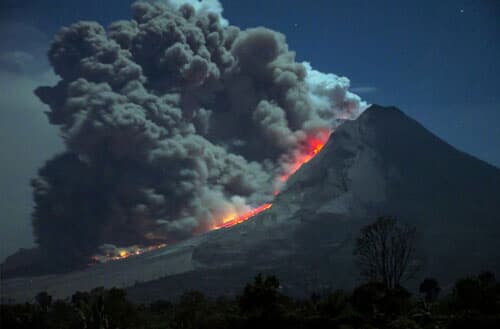 Volcanoes are shaped when magma from Earth's upper cloak works it's way to the surface. As a result at the surface lava and ash occurred. During the time as the volcano keep on to erupt, he gets larger and larger.

Did you ever wonder can one of these pop up in your backyard?

Can a volcano pop up anywhere?

Volcanic eruptions don't occur just anywhere. 60% of all active volcanoes are located at plate boundaries such as the Pacific Plate, which is very well known as the Ring of Fire because of many active volcanoes on its perimeter.

So if you live on or close to the famous Ring of Fire there is a little chance of a volcano in your backyard and if you don't the answer to the article title is pretty much no.

Today on the internet you can find many videos and articles about volcanic eruptions in someone's backyard but it's only science experiments and some of them erupt, even with flames.

One exception in history is definitely the volcano Paricutin in Mexico. Here volcano popped up in the cornfield. It stood up at 1300 feet and spread lava around village Paricutin. This event takes place in February of 1943, it's rare but still possible. Paricutin is actually the only noted case of a volcano popping up in a random, inhabited place. Despite this event, there is no need to worry. Paricutin was on the fault line where a phenomenon like this could happen and also there was strong tremor soil before the volcano arrived.

Whit all these climate changes, the volcanic activity could be higher, but places where is that case such as the Hawaiian Islands are monitored all the time.

If it still bothers you can a volcano pop up in your backyard, the answer is yes, but only a theoretical chance. You can always find and look at the map of fault lines in your area. If you're not on them, it's practically impossible. Even if you are, there's a slightly higher chance but nothing you should worry about.